From bullshit jobs to solidarity

Transcript of Ieva Padagaite's scene-setting speech at the Coop Ways Forward conference in Manchester on 20 January 2017 - the day of Donald Trump's inauguration.

Ieva is a filmmaker with Blake House coop; a member of the Young Cooperators Network; an associate of Altgen, which works to inspite young people about cooperatives and cooperation. She served on Cooperatives UK's National Strategy Panel, and is a member of the UK Worker Coop Council.

"I’m very glad to be here on a day like today, even though the future looks grim and little seems to make sense. Because today is Blake House Filmmakers Cooperative’s first birthday, and I’m surrounded by inspiring people sharing ideas about creating a different future.

I co-started Blake House coop as an alternative to precarious, exploitative and unethical practices in the creative industries, because trying to win the rat race was too hard for me. Zero hour contracts, minimum wage, 14 hour shifts, abusive bosses, competition amongst colleagues and the complete non-existence of purpose in my work made me disillusioned, anxious and isolated. I saw my friends forced out of the city by rising rents, moving back with parents, in hospital with mental health crises. We blamed ourselves - we were not good enough, we weren’t talented enough, not beautiful enough, not male enough. We were unwanted.

I co-started Blake House because I wanted to create an alternative for myself and my friends to work with dignity and purpose. I wanted to use my skills, my craft, my time as an antidote to the reality we are conditioned into. Now, for almost half a year, I am getting paid a living wage and I couldn’t be more proud. 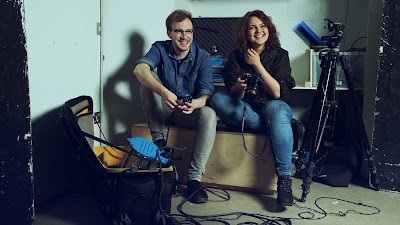 I don’t think people quite realise the extent of the connection between economic inequality and exploitation, and the mental health epidemic among young adults that is driving brilliant people from my generation into depression and self-medication. People suffer in silence because in society where everything is allowed and everything is possible, it can only be your fault if you are not clever enough to meet your needs and aspirations. Shame keeps people quiet.

As a filmmaker, working mostly on campaigning films, I interview many young freelancers, women and minorities about their dreams, aspirations and challenges. I hear heartbreaking stories that I can relate to on a personal level - stories about exploitation, poverty, sexism, psychological abuse and the collapse of peoples’ sense of self-worth. Stories where people open up about their mental anguish, and the shame of failure. One of these films, which we made for an Altgen campaign about freelancers’ coops, will be coming out in February.

And now we have Brexit, Trump, humanitarian and environmental crises, hitting us endlessly. We have a situation where people don’t just want change, they see the world going in the wrong direction - and they will not accept it. So more and more people open up, share their stories and come out of isolation, realising that they are not alone. They start to see their collective power, and that there is an alternative.

Here lies an opportunity and responsibility for cooperators and the coop movement to inspire, empower and amplify voices and actions of people wanting and trying to build a different world for themselves and others, one based on solidarity, kindness and equality.

I confess I wasn’t a natural cooperator. My whole upbringing led me to be the opposite. I was born in Lithuania, just a year after its independence from the Soviet Union. I grew up in a new America, where capitalism and neoliberalism seemed to symbolise freedom and open borders. Unlike my parents, I was supposed to be able to achieve anything, to be anyone I choose to be. I was told that if I followed instructions, got a degree, worked hard and strove to be better than others, I would be happy. I did everything that was expected of me. Yet I was still failing.

And then a slow shift started to happen. I read an article called Bullshit Jobs by David Graeber, in the coop magazine Strike! This was the beginning of my encounter with the coop movement, where I found a place of belonging, solidarity and support. I heard Altgen say that I didn’t have to climb the ladder. I found young cooperators who refused to build their success on someone else's failure. Simon from Blake House taught me about mutual care and collective resilience. Marisol from Cultural Coops and people from worker coops told me I had the right to be angry, and helped me find the words and confidence to express my ideas. Their stories and ideas played a big role in my personal transformation. I feel very privileged and lucky to have had that.

It’s up to us to create spaces and opportunities for more people to become cooperators, especially now, when so many are questioning the status quo. We need to say: “how is it people can value and defend democracy and freedom, while they spend a third of their lives working at a job where they have neither?”

The right says say that making a big wall, a great wall, can solve your problems; that all the immigrants are stealing your identity and dreams. We need to tell a better story. We need a vision of a co-operative future that people can relate to on a personal, not just a theoretical level. We need to tell stories about personal change, before we talk about economic change. If we are serious about spreading cooperation and building a cooperative economy, we need to recognise that cooperatives depend on individuals being co-operators, and that cooperation consists of personal political acts. We can’t tell people to talk to faceless entities, or websites, or numbers at companies house. We have to talk to people on a personal level about what it means to be a co-operator, what it means for me and you.

Today, what is the state and role of organisations and institutions in cooperative and solidarity movements that were built on desperation, honest need and a courageous vision of equality that people were prepared to fight for? Why is it so hard to relate to them today? Why do they seem faded and bloodless, justifying themselves by their history and tradition, turning into museums - rather than actively responding, progressing and transforming, together with people’s needs and values?

People newly discovering cooperation and their political voice need support, they need a springboard to launch themselves and to inspire others. They have energy that you can’t replicate. And what happens if, at this time of awakening and creation, people are met with alien, passionless language, and yet more hierarchy, bureaucracy, disconnection, even hypocrisy?

We need less management and more facilitation; less top down strategy and more grass roots culture; less branding and more platforms for people to co-create and transition. We need to seriously rethink what cooperatives mean today.

Now, I identify myself proudly as a worker cooperator. Why use this word, ‘worker’? It’s a stretch, because of how most people use the word worker in everyday life. When we went through school and university, none of us identified ourselves as wannabe workers. Workers went into factories - now we have robots. You didn’t identify as a worker in a service based economy because you were too busy making up definitions of your very special and unique job title, that would add to your personal brand and justify the £50k of debt you were getting for having an education. The word ‘worker’ just wouldn’t do.

So, to allow more people to recognise worker coops as the most sensible, exciting and responsible technology you can use to pioneer solidarity economy in the 21st century, we need to elaborate on what a worker today is, what workers are collectively. We need to reclaim the future of work, so that people in the growing creative, tech, freelance and other service industries can identify as workers, without cringing. Yes we are entrepreneurs, creatives, freelancers, technologists, developers - and we are workers. It’s a political and technical term, and takes time to grasp. We need to put new emergent and evolving values into our culture and expectation of work, such as our demand that work should be meaningful; that we should have choice about how and when we work; that work should be creative.

Young people are not the spoiled, entitled narcissists we’re often accused of being in media. Our values are quite in line with the culture of coops. We care more than the world lets us express. So it is important in this time of division and growing inequality that cooperators take it upon themselves to be storytellers, to be an antidote, to counteract toxic narratives with courage, curiosity and compassion. We need to say and show that the future of work is ours to build.

It’s not so much cooperatives that are pioneers in the 21st century, as the cooperative people in them, and beyond. To build roads forward, we need to work for a shift in peoples’ consciousness; to show that there are many different paths to move in a common direction, with a shared vision."

See Ieva's video statement about cooperative solidarity and the political character of cooperation.